The IFATCA Executive Board held its first board meeting of 2020 at the EUROCONTROL premises in Brussels, Belgium from 22 jan until 24 jan.

The board discussed the updates from the executive board members, which showed a significant amount of work done in the background by PCX, DP and EVPF to reorganise the Federation’s finances and make them more transparent. The board agreed to test an alternative tool to track the Federation’s expenses. The new platform will be evaluated, aiming to decide by mid-February on whether to migrate from Concur.

Helena Sjöström, Deputy President, updated the board on a revised Code of Conduct. This version 2.0, as proposed by the Equality, Diversity and Ethics TF was approved and will be used during Conference 2020 through an updated leaflet.

During the last Asia/Pacific regional meeting, a group of 4 regional vice presidents were appointed, along ICAO regions. EVP ASP also highlighted a continuing issue on the border of Japan, Korea and China. He also mentioned the issues in Nepal, where splitting the aviation authority would affect the controllers.

Following the lead of Asia/Pacific, Americas appointed regional vice presidents in charge of subregions. Training, staffing and infrastructure main problems in AMA. EVP Americas mentioned that the Argentinian MA is a major drive in the region and acts as a magnet for others.

Fateh Behkti, EVP Africa & Middle-East, updated the board on the situation in Ethiopia, where a number of controllers remain suspended. A letter for the authorities is prepared but IFATCA is awaiting the formal go-ahead of the MA.

Tom Laursen, EVP Europe, highlighted the increasingly prominent role of EUROCONTROL in the region. As indicated before, Tom is not considering another term as EVP Europe but is as of yet undecided on whether to seek another role on the IFATCA EB.

The board agreed with a request from the World ATM Congress organisers to provide a moderator for a Fatigue and Wellness panel at the event. Tom Laursen is proposed to take on this task, as he is planned to attend the event. Deputy President, EVP Tech and our Corporate Members Coordinator will also attend, with the former participating in a panel on gender equality.

As an increasing number of MAs are affected by natural disasters, the board decided it is not practical for the Federation to collect and distribute funds in support. Instead, IFATCA will act as a conduit but not as a collector for disaster relief: we will advertise the MAs efforts and encourage other MAs to directly support.

The IFATCA Executive Board is monitoring the outbreak of a coronavirus in China and parts of Asia. During this week’s Executive Board meeting, the board decided to discuss the evolution and the consequences of the outbreak during their regular teleconferences as part of the conference planning activities. For the moment, there are no direct or indirect indications that our conference will be affected and we are confident that the Singapore authorities are well equipped to mitigate the outbreak. Should any of this change, we will of course not hesitate to advise our Member Association and to propose the appropriate actions.

In closing, the IFATCA Executive Board would like to thank EUROCONTROL for providing the meeting facilities without cost and for the opportunity to visit the Network Manager’s operations room. 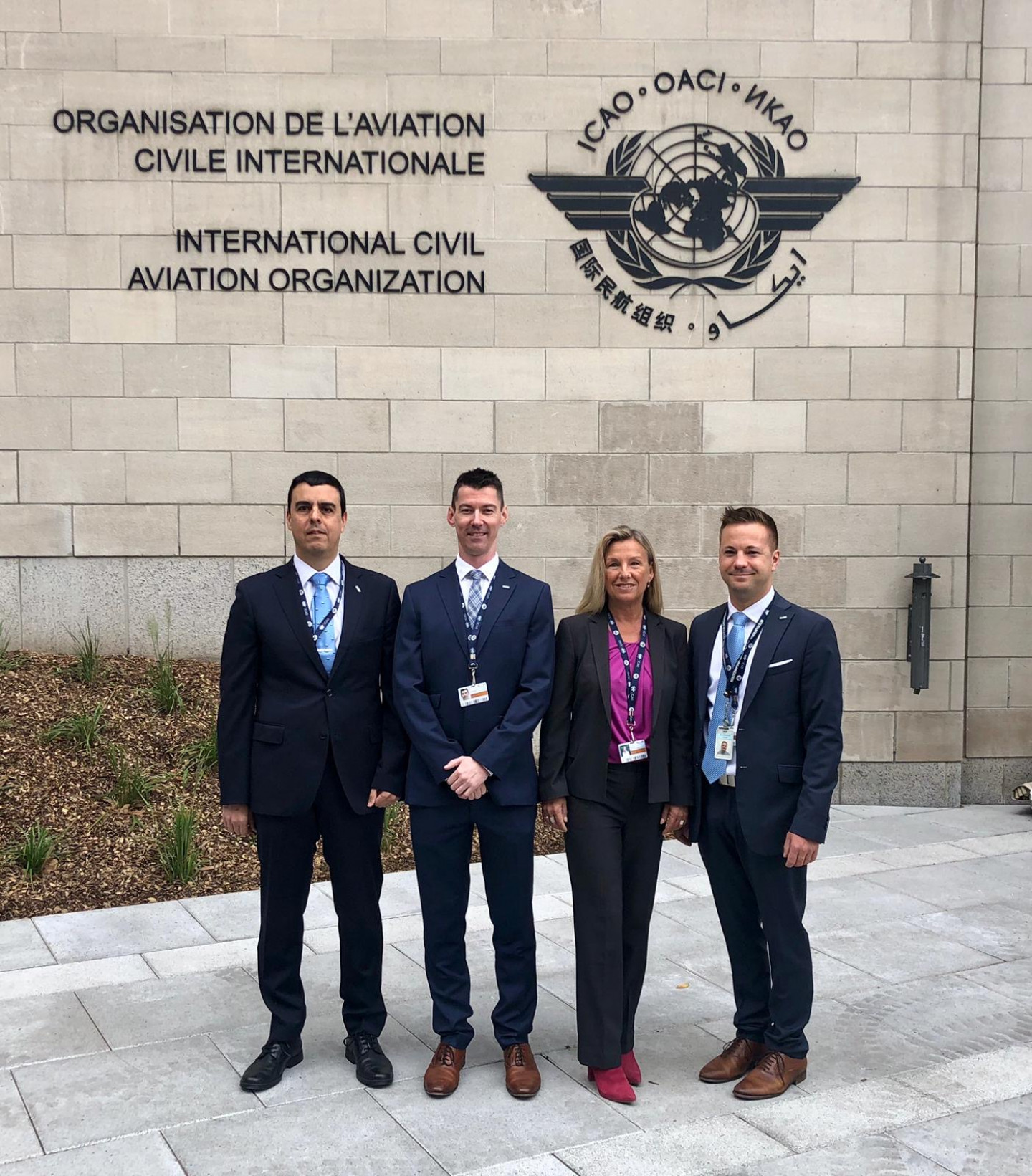 The 40th ICAO Assembly took place last 24 September to 4 October 2019. It was attended by more than 2 400 delegates from around the world, representing 184 of the 193 Member States of ICAO and 55 international organizations, such as ACI, CANSO, IAOPA, IATA, IBAC, ICCAIA, IFALPA, IFATCA, and many more. Interesting to note is the fact that this year, the Assembly coincided with the 75th anniversary of ICAO.

The Assembly is ICAO’s sovereign body; it meets at least once every three years and is convened by the ICAO Council. It is divided into five different commissions: administrative, economic, executive, legal and technical and its primary objective is to determine the direction, budget and work programme of the organization for the next triennium. It is also during the Assembly that Member States are elected to the Council.

During its 40th iteration, the Assembly produced and reviewed more than 640 working papers and information papers. IFATCA co-signed five working papers with other industry organizations (ACI, CANSO, IATA, ICCAIA and IFALPA) on topics of mutual interest, such as commercial space operations integration, the need to address harmful interferences to GNSS signals, the need for standards and guidance to mitigate the risks related to unauthorized UAS operations, the future of frequency spectrum needs in aviation and UAS traffic management.

Immediately before the Assembly, the Executive Board gathered for a three-day meeting, also in Montréal. The presence of the entire executive in the city that is home to ICAO was not a coincidence; it was an excellent opportunity for some of the EB members to meet with other international organizations such as IFALPA and ITF, while for others it was the perfect moment to work on logistic and financial issues at the IFATCA office, along with Tatiana, our Office Manager. Meanwhile, our Liaison Officer to the ICAO ANC, Jean-François, was putting the final touch to the interventions drafted by the group for the Assembly and took care of the necessary coordination and arrangements with some of the key industry partners and States present at the event.

Over the past week, the IFATCA Executive Board met in Lisbon. It was the last face-to-face meeting before the Federation’s world-wide conference in Costa Rica at the end of May. As such, preparation of the conference and its workshops was a main focus. Board members presented updates on the state of the Federation, our profession and any future. This included the Federation’s strategy, as it will be discussed during the conference. In line with this strategy, the board defined the top priorities, paying close attention to the needs of each region. The board also reviewed the financial status and discussed ways to optimise the financial oversight in each budget post. Finally, time was also spent on the preparation of IFATCA’s participation to the 40th ICAO Assembly, to be held in autumn this year.

Member Associations, remember to register for Conference at https://ifatca58.com
We hope to see you all in Costa Rica!

The last day of the EB meeting was dedicated to a final review of the work done during the previous days on strategic lines for the Federation. This included work on what can be considered the IFATCA pillars: ICAO work, TOC and PLC, Regions, Safety, Training Courses and Prospective activities.

The rest of the day was dedicated to prepare for the upcoming IFATCA Conference in Costa Rica, 2019.

The next EB meeting will take place in February 2019. Many thanks to our Argentinean hosts for their hospitality and help in organizing this meeting. Significant action points arising from the meeting:

• The EB will finalise establishment of the Tactical Response Team (TRT).

• The EB confirms the 58th annual conference of IFATCA being a 5-day event with the opening ceremony on Monday morning, closing on Friday afternoon.

• The EB continued work on formalizing the ‘Remote TWRs’ and ‘Drones’ groups and also considered the addition of other groups focused on ‘Safety’ and prospective activities.

• The EB formalized internal processes to manage financial matters in the absence of an EVP-Finance.

• The EB reviewed expenditures for the first 3 months of the financial year and verified being well within the approved budget.

• The EB decided to hold a “Think Safety” course for the Executive Board and members of TOC and PLC at their joint meeting in March 2019.

• The EB reviewed the IFATCA training courses and decided the continuation of this initiative.

• The EB worked significantly on the IFATCA operating plan. On the 4th day of the EB meeting, EB members visited the tower of Aeroparque and learned about the complexities of an area where 5 airports are located in close proximity and also were briefed about the main issues for the Argentinian Air Traffic Control system.

EVP Technical presented his report of activities including an update of the development of the Technical and Operations Committee work. IFATCA’s Liaison Officer to the ICAO ANC also presented his work at ICAO and the ongoing preparations in view of the 13th Air Navigation Commission.

EVP Professional’s report was focused on the courses developed by IFATCA which have already been of use for a number of associations: Aviation English, Think Safety, Competency Based Training. He also updated the information regarding the Professional and Legal Committee.

The third day of the EB meeting was focused on continued development of the long term operating plan for the Federation. A review of the global activities was correlated to constitutional objectives and regional priorities. The EB attended a team building event displaying Argentinean culture and traditions. The day concluded with a teleconference regarding the finances of the Federation. The EB meeting goes on for the second day. The EVP Americas presented IFATCA activity in the region with special mention to the English language courses that have been organized in several countries of the region.

The report of EVP Europe focused on the Single European Sky evolution and the objectives of RP3 (third reporting period).

The EB also dedicated a session to review the strategy of the Federation to set its course for the following years. Meeting of the EB at Buenos Aires. During the first day of the meeting the EB discussed how to improve communication within IFATCA to ensure that information about the work of the Federation is available to every MA.

During this first day, the EB received the report of the EVP Asia-Pacific and EVP Africa-Middle East about their regions. During the session, the EB got a telephonic update from the Ethiopian MA about their situation with several controllers put under arrest following an strike considered as illegal by the Ethiopian government. The EB studied how the escalation of tension can affect operations and safety and discussed ways for the Federation to help to normalize the situation.