Home / About IFATCA / The Executive Board / Deputy President 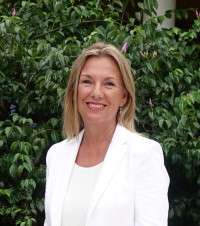 With more than 30 years of experience in Air Traffic Control, Helena still thinks she has the best job in the world. She has worked in all three branches of ATC: Tower, Approach and Area Control.

Her first position was in Visby Tower on the Swedish island Gotland in the Baltic Sea. The majority of her career has been spent in the TRACON Östgöta Kontrollcentral, ÖKC in Norrköping, Sweden as an approach controller. The airspace in Östgöta TMA is rather small but holds four airports, two civil and two military. The two military airports are the Swedish Airforces pilot academy and SAAB, manufacturer of the Swedish fighter JAS39 Gripen. These two airports are located only 9 km from each other. This contributes to the need of very fast decision-making, which suits Helena perfectly. She is since 2016 Watch Supervisor at Stockholm ATCC, with responsibility over the entire ATC operations during the shift.

In addition to the controlling, Helena has throughout her career been very active in the Swedish Air Traffic Controller´s Association, SATCA. She was the President of SATCA 2007 – 2018. Helena´s involvement in IFATCA has included work on the federation´s Magazine, the Controller and two years (2018-2019) as Chair of IFATCA´s Committee A during the annual conference. During the conference 2019 in Costa Rica, Helena was elected  Deputy President of IFATCA.

In addition to the other tasks that fall onto the Deputy President, Helena is the person on the Executive Board who is responsible for arranging the annual conferences and also for the newly created Equality, Diversity and Ethics Task Force of IFATCA.

The Deputy President shall be responsible for:

- closely monitoring all other activities of the Federation;

- the preparation of public relations material and media relations as directed by the President and Chief Executive Officer.